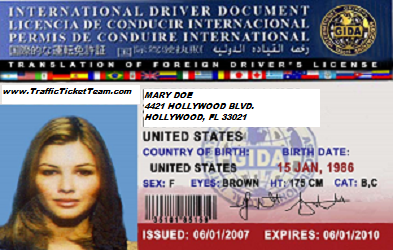 Well, I need to give credit where credit is due. They just repealed the law before it went into effect. What does that mean for our foreign visitors now? They still must have a valid drivers license from their home country. If stopped for a traffic ticket, they will be required to show their valid state, province or country’s license. This is good news for our documented visitors. Canadians are rejoicing since there are a lot of them who call South Florida home in the winter. The problem still lingers for those that are undocumented. The problem persists in Miami Dade County in particular. After 9-11, we went crazy and passed some dumb laws that don’t do anything but make the roads more dangerous.

Had a Florida drivers License before 9-11, but still undocumented? This is the most common problem. Before 9-11, millions of undocumented workers lived full time in our state. They paid taxes, had a social security number and even had a drivers license. Most of these people were from Mexico and other South American countries. None of which pose a threat of terrorism to our country. But in the panic that followed, Florida passed a law that you can not get a drivers license unless you have a social security number. The Feds decided that if you are undocumented, you can’t get a social security number. What happened was predictable. After their driver’s licenses expired, they continued to drive. So speeding tickets, red light tickets who cares, no license no worries.

Why you should care if undocumented people continue to drive without a drivers license? The idea behind the ban was that we should not have terrorist living amongst us who can blend in and get social security numbers and drivers licenses. Never mind that all of the 9-11 hijackers were here legally. Forget that homegrown terrorists have killed more people on U.S. soil than foreigners. Back to the drivers license issue. So ok, why should you care. People have to eat. People have to work. People have to go to school and to the doctor. Florida has one of the worst public transits\ systems in the country. It’s almost impossible to live in Miami-Dade or anywhere else in Florida unless you drive. So just because we stopped undocumented people from getting licenses doesn’t mean they have stopped driving. They are still driving, only they have no insurance. You can get insurance unless you have a drivers license. So when one of them crashes into your car, you will have to pay. Also, if they get a ticket for poor driving, they don’t care because they have no license to get points. They have no incentive to follow the rules of the road. Oh, and you can get in trouble too. If you lend your car to someone who has not drivers license and they get into an accident, you could be liable. And you insurance company might not cover you since you gave your car to an unlicensed driver.