POT CHIPS? What will they think up next?

POT CHIPS? What will they think up next? 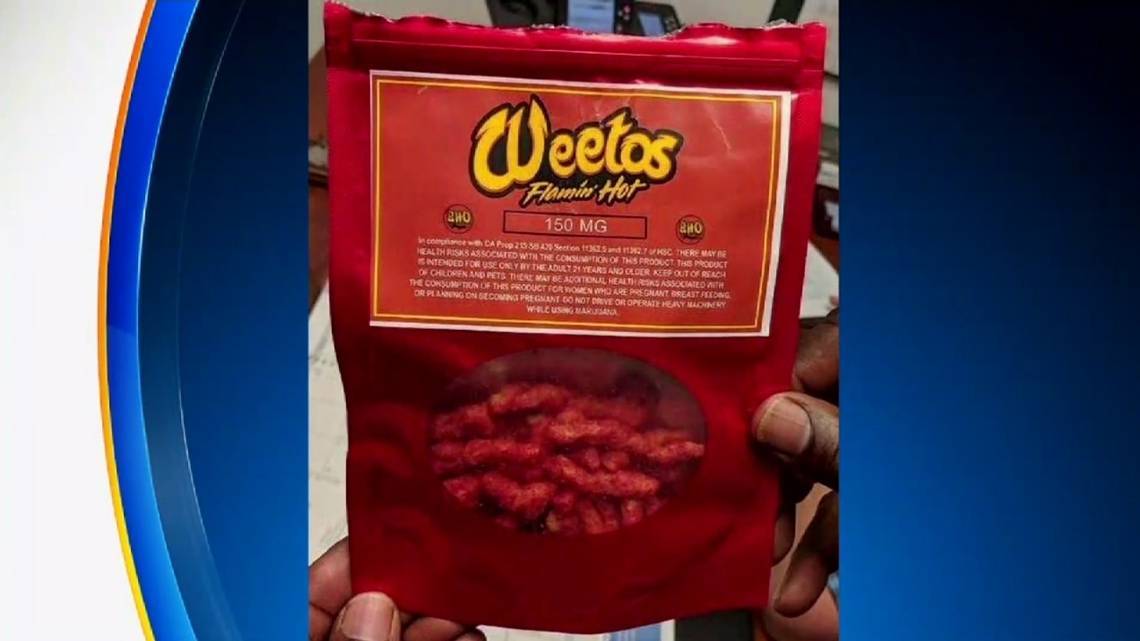 BY HOWARD COHEN of the Miami Herald.

A handful of students got baked at a Hollywood school earlier this week after they allegedly ate a pot-laced snack.
According to a police report, a 15-year-old girl brought a bag of chips that resemble the popular cheese snack, Cheetos, and shared them with three fellow students. But her bag was labeled Weetos Flamin’ Hot and the chips were laced with THC, the ingredient in marijuana that gives users a high.

One of the kids was taken to a local hospital, another hallucinated after eating some chips and a third had to be carried out of school by her father because she couldn’t walk. Weetos is a brand of “medicated snacks and cereal” marketed in California, where the marijuana-laced products are legal and sold to adults. But Rod Emerson, the owner and creator of Weetos Edibles, told CBS4 that what these kids consumed was not his Weetos.

For one thing, the bag brought to Driftwood Middle School on Monday does not resemble the official Weetos brand. The Driftwood bag is red and orange with a central window that reveals the product, which is shaped and colored like Cheetos or one of Burger King’s Frankenstein-like Flamin’ Hot Mac n’ Cheetos snacks the Miami-based fast food company sold last year. The logo is also similar to the BK item.

The California-based Weetos bag is solid, its logo font differs from the bag confiscated at Driftwood, and the colors are red and yellow nestling against a green marijuana leaf. WeetosCalifornia.jpg
The home page of Weetos Medicated Snacks and Cereal, a California company that markets products infused with marijuana. These snacks are legal when sold to adults in California. The bag’s design differs from the “Weetos” a student brought to a Hollywood, Florida, school on April 23, 2018.

Weetos Edibles
“It’s not me. I’m not the one doing it and I’m on their side,” Emerson told CBS4. “People have taken the Weetos name and tarnished it a few times in the last three years. I don’t want any children getting my products, and if I find out that anybody is providing children with my product, they’re going to be reported, among other things.”

According to WSVN, two of the students knew they were eating THC-laced snacks, but one, the 14-year-old girl who was transported to the hospital, said she was not aware she was eating anything stronger than a Cheeto, her brother told the station.

“She said it tasted just like it, texture, everything. Orange, crunchy, no difference. While later, she started feeling the effects as she was transferring to her next class where she started just feeling super ill, dizzy, in and out of it basically,” Kevin Klein, the girl’s brother, told WSVN.

After treatment, the effects wore off, Klein told WSVN, but real life is not a Cheech & Chong movie and the family is not amused. “Definitely upset. It could have been prevented. It shouldn’t be something that 14-year-olds have access to,” Klein said. The unnamed student was charged with possession, suspended for 10 days, and is being recommended for expulsion.